The Research Brief is a short take about interesting academic work.

Use of antiretroviral treatments to prevent HIV infection – called pre-exposure prophylaxis or PrEP – is very low among high-risk populations with poor access to HIV care, especially Black men in the South who have sex with men. That’s the main finding of our new study, which suggests public health officials will need to do more outreach to this population if they hope to end the HIV pandemic by 2030.

The U.S. Food and Drug Administration has approved the use of two oral medications for PrEP, Truvada and Descovy, to prevent HIV in high-risk populations – for example, people whose sexual partner is HIV-positive. Both medications are clinically indicated for use among gay men.

The widespread adoption of these treatments is a crucial component of the United States strategy for ending the domestic HIV epidemic by 2030. Multiple clinical trials have proved that these treatments are safe and highly effective at protecting people from becoming HIV-positive if used appropriately.

According to the U.S. Centers for Disease Control and Prevention, PrEP lowers the risk of contracting HIV from sex by around 99%.

Our study found several barriers to PrEP use among Southern Black gay men. They include stigma, homophobia, poverty, access and transportation issues, distrust of the medical system, negative attitudes from health care providers and misinformation about PrEP.

Our review and findings were based on assessment of existing research and data on this population. This includes epidemiological data from organizations such as the CDC.

We concluded that programs need to be structured in ways that effectively address the varied concerns and different barriers to care that these men experience, as well as encouraging more PrEP use among these men.

The national plan for ending the HIV epidemic by 2030 prioritizes widening PrEP use. Six of the seven states identified as key to the plan’s success are in the South.

According to the recent CDC HIV Surveillance Report, the South accounts for more than half of all new HIV diagnoses in the U.S. Men who had sex with men comprised 69% of the new national HIV diagnoses, with the rate higher among Black gay men.

Another CDC study shows that half of Black gay men in the U.S will be diagnosed with HIV in their lifetime.

Almost all insurers must cover 100% of PrEP treatment, which is designated a required preventive treatment under the Affordable Care Act. Nonetheless, the nationwide HIV infection rate among Black and Latino gay and bisexual men has remained the same for the past 10 years, according to the CDC.

These facts point to the need for rigorous research and PrEP promotion and awareness among these Black men and other underserved populations.

CDC surveillance data from 2015 reveals that of an estimated 1.1 million adults who would benefit from PrEP use, 71% were gay men. However, there are no publicly available or coordinated statewide or regional data measuring PrEP uptake among eligible adults.

This is particularly true in the Southern states that are disproportionately affected by the HIV epidemic.

In our review, we also observed a lack of interdisciplinary scientific research exploring the complex interactions between the many barriers to sexual health care by Southern Black gay men.

To dig deeper into issues identified in our review, we hope to gather data on PrEP use among Black gay men in South Carolina, where we are based, and other Southern states.

Our long-term goal is to collaborate with these men to develop, implement and evaluate culturally acceptable HIV prevention interventions to reduce HIV incidence in the community.

This article is republished from The Conversation under a Creative Commons license. Read the original article.

Banner image photo credit: Black men who have sex with men in Southern states have a low rate of using HIV prevention treatments. yacobchuk/iStock/Getty Images Plus via Getty Images 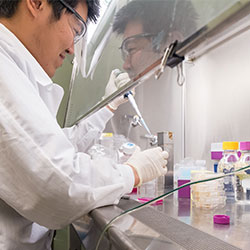 The University of South Carolina offers the state’s most comprehensive suite of health disciplines, with two schools of medicine, four clinical campuses and programs in public health, pharmacy, nursing, social work and many other academic areas. Overall, the university offers more than 100 health science degree programs.

Featured in The Conversation

The Conversation brings academic experts together with professional editors to create timely, insightful content for a general audience.

Email Peggy Binette at peggy@mailbox.sc.edu if you are interested in sharing your work with a national audience.